In my sophomore year of high school I joined the new “International Affairs Club”, an organization created by two history teachers for the sole purpose of taking a trip somewhere and calling it an educational experience. The initial venture was a visit to the United Nations building and since all of the students returned safely without incident a grander vision emerged. So it was that I found myself at the family dinner table asking my parent’s permission to go on a trip to Russia, a wholly unexpected question that required clarity to ensure there wasn’t a punchline forthcoming.

To pay for the trip I got a job at Burger King. Now my first job interview was at a Bradlees but either they didn’t hire 16 year olds or they were not amused by the fact that I forgot my fly was open during the interview but Bradlees is no longer in business so who’s laughing now? I worked and eventually went on the trip. Already thin as a rail as an active high schooler who walked to and from work when conditions permitted, I found the food in both London and Russia wanting so when I returned from the multi-week trip, I was so gaunt my parents were concerned. My mom felt the need to ask my buddy Chris to make sure I ate something when we went out to the local Bickford’s.

Even in the early years of college I never gained weight. The maxim that one can eat whatever one wants and not gain weight can be true if what you want falls within a budget of “close to zero”.  I also smoked cigarettes which was stupid as I started smoking long after a reasonable person knows it’s bad for you and there was no good reason for it, but as it was, the choice of cigarettes versus food often came out the former not the latter so again, I did not gain any weight in college. 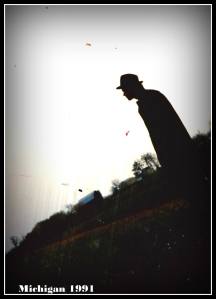 But after college, after I made a small amount of money, I could afford a 500 dollar car which I called Yorick, a hunk of metal with four wheels held together by bondo and anytime I looked at it I said, “Alas, poor Yorick” and I started walking less and ate more and sat at a desk more than 8 hours per day. In 1999 when I was happier than I had ever been, I gave up smoking cold turkey and never looked back while I continued my 8 hours of daily desk sitting and my exercise regimen I like to call “none” and I ate while still believing that I can eat whatever I want and not gain weight.

Imagine a war of inches where one side didn’t know they’re at war…for over a decade.  It helped that I didn’t purchase clothes often because I incorrectly believed having no sense of fashion was noble.

I remember when the pants size was 38 width.  Then it was 40 which was strange. At 42, I was noticing it more. I finally hit 44 and I kept my 42 sized pants knowing “I’ll be back there soon” and I plateaued. I recognized I needed to do something but with work schedule and family schedule I didn’t find the time to do anything about it and truthfully if I had really considered it a priority I would have done more but didn’t. I could plateau at size 44 because they came out with this amazing invention in clothes called a rubber band which stretched the material and they called it a “comfort fit”.

Last year I needed a new pair of pants to shoot an episode of Black Tie Lunchbox, a video program I’m working on with Connecticut comedienne KJ Johansen.  It’s not that I wasn’t wearing pants for the prior episodes mind you, it’s just that I needed a new pair as I wanted an option during a trip to Baltimore to shoot a Baltimore segment. I was startled to discover I didn’t fit into the comfort fit 44 x 30 at Kohls, I was actually size 50 and I weighed 260 lbs.

There’s something about being over a 250 mark or being at the last rung of the department store pant size that’s a game changer.  I started eating better and the weather held up so I walked more but in November something completely different changed it all.  I found a part time, manual labor job that had no part of it related to wanting to lose weight and everything to do with paying down debt and having a better seasonal income.

I started noticing the difference because I kept having to notch up the belt. Last week I notched it as far as I could go and I could see the pants had folded around the waist to accommodate a few inches so I knew I had lost some weight.

On day two of this new year I went to the local Big Lots and purchased a cheap scale.

I can tell it’s cheap because in the five times I’ve tried to use it I’ve received five different answers. So I’m anywhere from 246 to 250 which means it’s probably the higher number but it still means I lost ten pounds in three months.

It’s easy to start resolutions in January that vanish in March but I’m simply documenting I’m on a road that’s healthier without calling it a resolution and being active three nights a week (mostly weekend nights) is consistent exercise that I get paid to do.  A new year can be a starting point if one has fallen short of prior goals, and it’s a nice reminder that we all get a new start, but really we get a new start every day. The reality is that any time in June or an October evening or November 7th at 10:40am can be a perfect time for a new starting point. If we’re lucky enough to wake up and start the day, we are lucky enough to begin something again with resolve, we do not have to wait until we get to the January 1 placement on the Monopoly board where we hit GO and get our $200 before starting something anew.

For those who are working at your own goals, I salute you and wish you success. Tell me about it and we’ll support each other with “likes” and comments. But what if you’re one of those good folks who doesn’t know you’re in a war you’re fighting yet.  Maybe you haven’t had to go to the doctor or weigh yourself and you’re in that point where exercise doesn’t seem necessary. I remember when I was at 230 lbs which isn’t good at all for my height but now I have to fight and claw my way back to the bad shape I was in before so I can say I wish I began sooner but I’m glad I’m doing it now.  If you recognize something in that story, consider starting slowly and do something now while it’s an easier road to travel. And if you’re person who believes you can eat anything and not gain any weight, if you haven’t checked lately, take a few minutes to check to scale to ensure you’re right.

This is the year I get to 225lbs. I’m actively working on it and I’ve made progress toward that goal already.  This time I’m engaged in the war of inches. It’s breakfast time. The first battle of the new day has begun.