The Glass Menagerie: My Review

the cast and crew of The Glass Menagerie

Under the superb direction of Donato D’Albis, the Backyard Theatre Ensemble/Landmark Community Theatre Company’s joint production of The Glass Menagerie expertly captures the intriguing world of the young “Tennessee” Williams, the playwright who was brought to national prominence with this piece.  The Glass Menagerie is referred to as a “memory play” for it provides the audience with a window into the playwright’s humble beginnings. The set at the Thomaston Opera House is adorned with windows and the larger than life portrait of an absent father. I am constantly impressed by the set design that the award winning BTE creates.

Tennessee William’s first name was really Thomas so it is no wonder that the narrator of the play is “Tom” a young man who, like Williams himself, attempts to write while working a dead-end job at a shoe warehouse.  He has an overbearing mother and a sister Laura who has difficulty with interpersonal relationships outside the family.

Tom is portrayed by Chet Ostrostki, one of the co-founders of The Backyard Theater Ensemble.  With an amiable southern drawl, Ostroski makes an instantly likable and relatable host to the proceedings. We understand the almost claustrophobic nature of his existence, yearning for adventure while being tethered to a family situation outside his control.  Ostroski shares that the audience will enjoy the great detail that this production has to offer. “The set is extraordinary and true to Williams’s original vision, “says Ostroski. “Donato (D’Albis), along with the tech team, really took great pains to stay true to that. I hope the audience will see and appreciate the detail that Backyard Theater has brought to this production.” 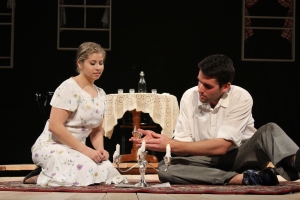 By far and away the focal point of the story is the overbearing mother Amanda, a character fully realized by Lucia Dressel. Dressel describes the role as a dream role “(She’s) the mother of all mothers,” says Dressel. “I adore her desire to take care of her children, her courage, and her ability to forgive. She’s amazing. She’s just had too much pain in her life to take the time to be patient and kind and she eventually pays for that.” Dressel’s Amanda is pitch perfect and I loved every minute Dressel was on stage.

The interaction between Dressel and Ostroski is witty and natural; they have an excellent rapport and the care they have for the actual people upon whom their roles are based is evident. The play may not be classified as a comedy but there are laugh out loud moments throughout the entire production. Thanks to the expert handling of the play by the cast, crew and director, the audience can empathize with the intentions of the family on stage and those intentions can lead to situations that are both comedic and tragic at the same time.

Nicole Thomas portrays the young sister Laura. Laura is described in the play as “crippled” though in this production Thomas’ limp is wonderfully understated which makes the character’s shyness and inability to handle relationships outside the family all the more tragic. There is one particular scene (not a spoiler) where she doesn’t say anything at all and as she looks at herself in a mirror, her face changes to reveal many emotions, telling the audience everything there is to say without words. It is a marvelous performance. Thomas says, “This script is so beautifully written, and it has been both a joy and a challenge bringing it to life.”

In the second act we are introduced to Matthew Albert’s portrayal of the gentleman caller, Jim O’Connor. The charismatic young man who realizes his popularity actually peaked in high school, in Albert’s hands this gentleman caller believes he can handle any situation he is thrown into as he is on this particular evening. “The way that we are working with Donato’s vision is incredibly artistic,” says Matthew Albert. “He is taking a classic and treating it with absolute reverence, showcasing every little emotion. Even if you have seen The Glass Menagerie before, our production will make you see another facet of the show.”

One “part” that is performed beautifully was the music performed by violinist Katie Gomes. Until she walked on stage at the end of the production with violin in hand, I had no idea that the wonderful music performed during the piece was performed live and just off stage. This idea, to have the violinist perform the music was an added touch of brilliance that captured a feeling of authenticity to the entire production. Kudos.

The Glass Menagerie is performed in the historic Thomaston Opera House and the final two performances are March 11, 12 at 8pm. There is a special offer for these performances of Buy One Get One Free (see *Transaction Fees apply to each ticket- All sales are final-Limit: 50 promotions available-Must be redeemed by March 13th 2016-Tickets will be held at Will Call)  For more information on tickets and group sales, contact or visit the Box Office (860) 283-6250 Monday – Friday 1pm – 6pm and Saturday 1pm – 4pm @ 158 Main Street Thomaston, CT 06790. Or purchase tickets online: http://www.landmarkcommuntytheatre.org.