A Night to Remember: A celebration of WAPJ from Culture4aCause

A brisk wind blew the light snow past the festively decorated streetlights as it descended with quiet and relentless purpose and as I pulled into a parking space at the most prominent corner of downtown Torrington, for a half a beat I enjoyed the warmth of the now completely heated vehicle before stepping out into the frigid night air. From across Water Street the bright light emanating from the Five Points Arts Gallery showcased a holiday spirit inspiring the refrain “It’s beginning to look a lot like Christmas” as I made my way to the entrance of the former Performance Hub. 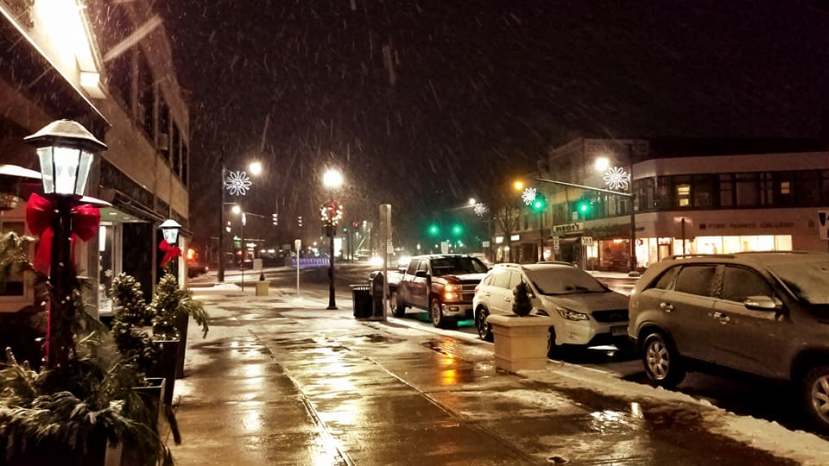 The sign for Performance Hub still adorned the building and the marquee said “Torrington Rocks!” while the window to the right of the entrance way featured the new work of artist Sue Berg. 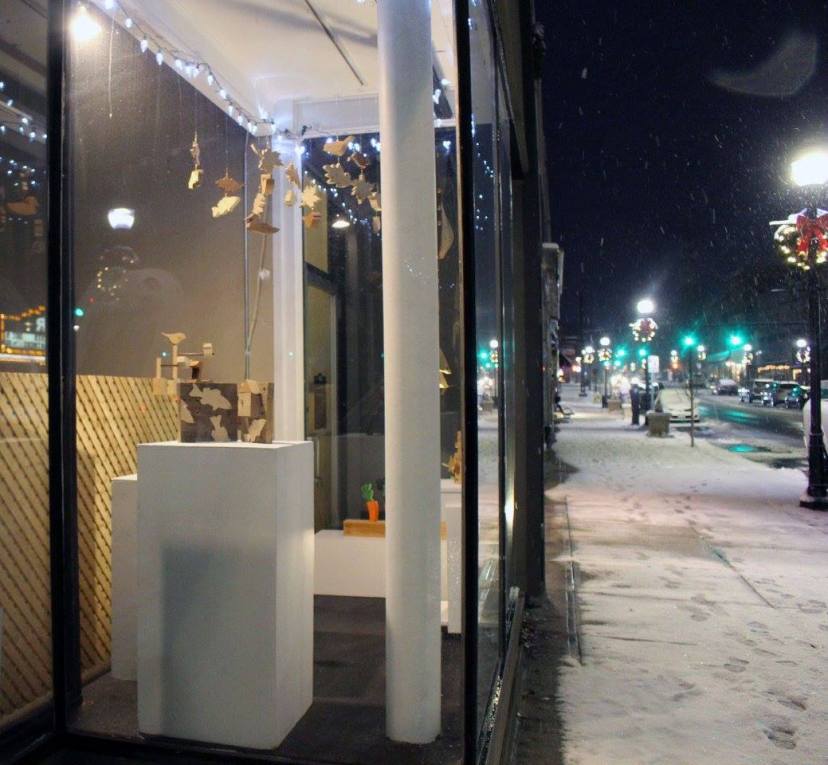 Inside the venue Jim Laurentano and Joe Petano worked on perfecting the audio experience for the night while musician Emily Victoria mingled with the staff and guests of Culture4aCause. Theresa Channell was setting up the beverage table before beginning her main duty of handling the videography as part of Channell One Productions.  Trevor Zeiner, a drummer who looked forward to playing future events in the venue, waited to take his place at the door. Catherine Pezze was setting up the food tables and had arranged the lovely Christmas decorations she had brought from home. Her husband had joked, “You’re not taking a Christmas tree too?” but she had arranged the wonderful trimmings and ornaments on the table tops, counters and around the hall and provided the space with the perfect celebratory feel for the evening. 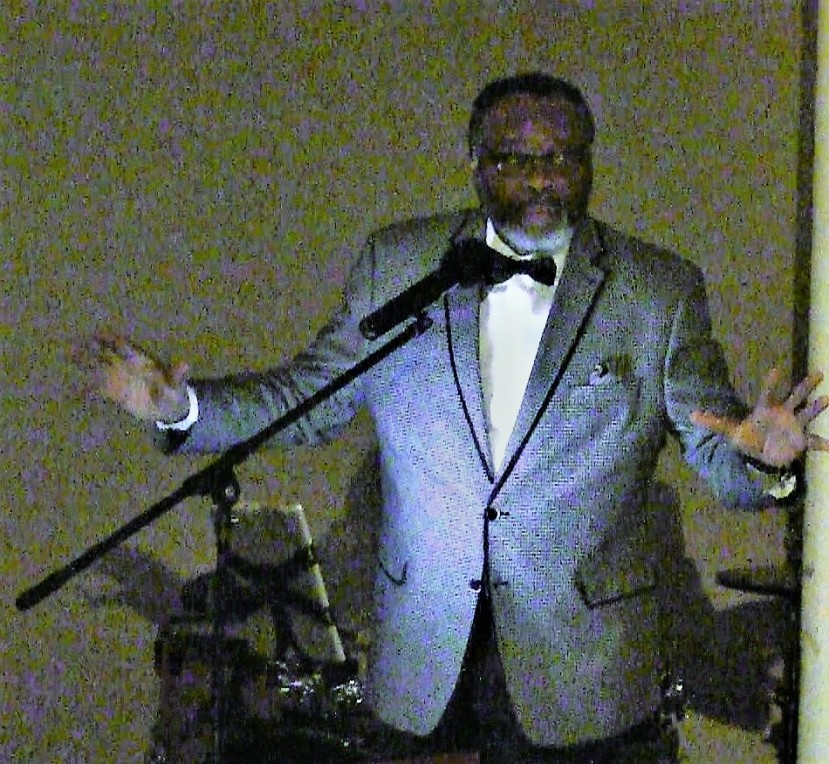 When he arrived Jacque Williams was dressed in his customary dapper style sporting a black bow tie and sharp suit jacket and he checked in jovially with each participant as they prepared for their part of the evening’s program. There was a specific plan outlined with time frames for when each segment would occur but the weather demanded a later start to allow more guests to arrive.

The night’s celebration was to honor WAPJ Torrington Community Radio’s 20th year as hosted by Culture 4a Cause, a non-profit 501c organization that works with other non-profits to raise awareness often within the arts/culture community but the event took on another equally important role of significance as it marked the beginning steps of new ventures and opportunities for the iconic 45 Main Street locale.

My intended role for the night was to conduct a few of the introductions, the first that was planned was for Jay Roberts. My friend Jay Roberts was the co-creator and co-founder of Performance Hub and the work Performance Hub did to turn the former art gallery and store into a concert venue was legendary. They tore down walls, created a window between rooms that overlooked Water Street, set down carpet, painted the interior, set up the basement as a green room and the upstairs as a technical work-space, and setting the stage between the structurally important permanent pillars in the main room.  Performance Hub USA Educational Foundation LLC was still functioning without the need of a physical space and Roberts had come straight from providing guitar lessons to the event. As more invited guests arrived Roberts and I spoke of fond memories of the Hub and of the new album he was working on earlier in the day at Tracy Walton’s On Deck Sound Studio. 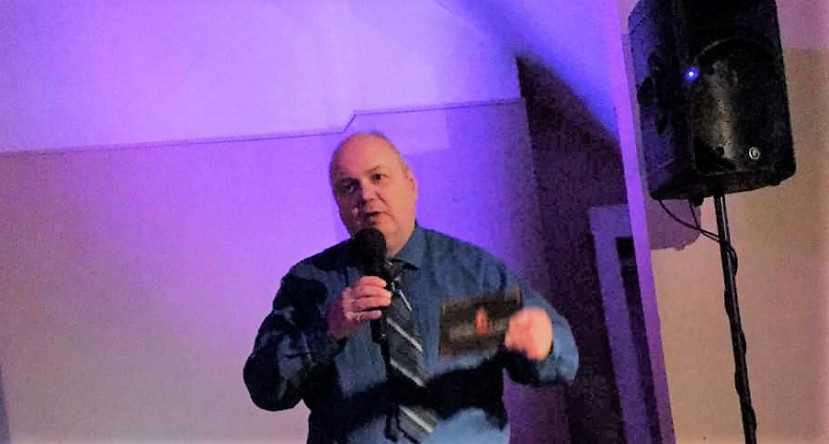 Jacque asked me to give the attendees the five minute warning that the program was about to start and then asked if I would introduce him to begin the event.  Happily accepting the challenge I stepped to the microphone and after giving the five minute warning, allowed the five minutes pass until the lights dimmed and then returned. I said something to the effect of, “Good evening ladies and gentlemen, I’m J. Timothy Quirk of WAPJ and it’s my honor and privilege to introduce to you the master of ceremonies for the evening. He’s a gentleman who loves his community and he shows it in many different ways, n his actions whether it’s being part of ACT, whether it’s playing his own music at Coe Park and many other venues, whether it’s being a positive presence online in social media and a whole host of other ways including as the program director for Culture4aCause which is why we’re all here today. So I’d like to introduce you to a gentleman who puts his heart and soul into everything he does, so ladies and gentlemen please put your hands together to welcome the master of ceremonies, my friend, Jacque Williams!” 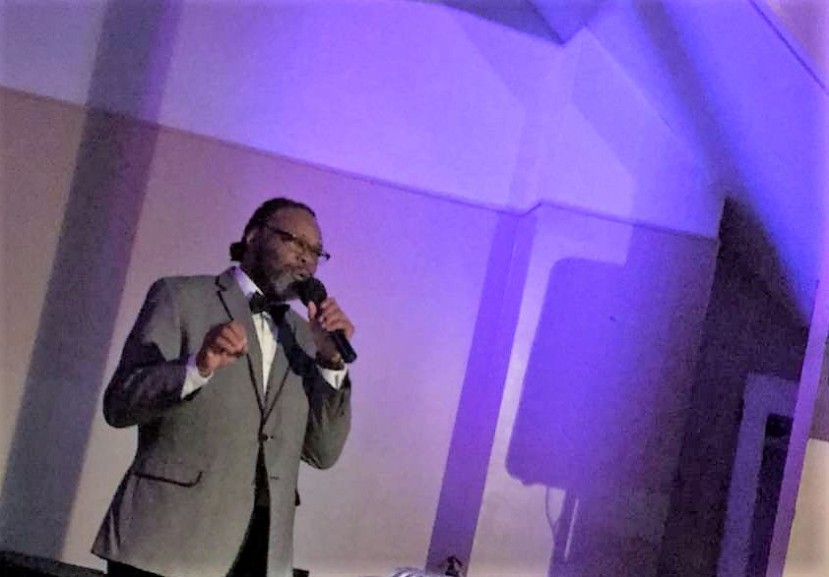 With a smile Jacque stepped to the stage and welcomed the invitees, performers, the honorees and shared warm regards for Culture4a Cause and for the purpose of the event which was to honor WAPJ’s 20th year and Isadore Temkin and the Temkin family who made WAPJ possible. Then taking the initiative and deciding music was in order to start things off instead of the video which he preferred to play later, he introduced Jay Roberts to the stage to perform. 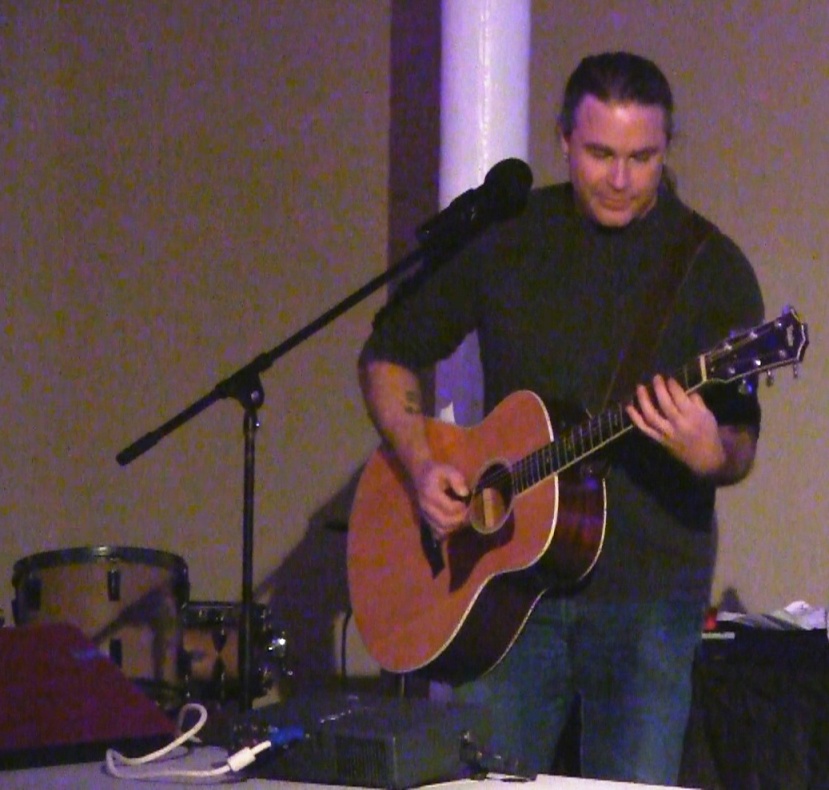 Roberts took the stage and provided his greetings and then launched into a wonderful set that featured his extraordinary vocal range and guitar acumen.  His set included Devils Son, Baby Please Come home. Going to California, Braun ‘Y’ Aur Stomp and he shared one song, Not the Way, which he had written at the Hub almost at the very spot where he was performing. One of my favorites was a rocking rendition of a Christmas classic “Winter Wonderland.  It was a perfect way to start the evening. Not only was Jay Roberts the Performance Hub co-founder but for 3 years he was a WAPJ broadcaster and his show featured local music and musicians.

After the set Jacque played the video slide presentation created and donated by Channell One Productions featured photos of WAPJ throughout the years.  I enjoyed seeing many photos of the broadcasters in prior years and many photos I had personally taken throughout the years during my support of WAPJ. When the slideshow ended I provided a bridge between the slide show and the second musician for the evening, Emily Victoria. I said, “What a wonderful video and though it may be a little cool in here (the heat in the venue was noticeably not working at 100% level which warranted an acknowledgement) a video like that warms the heart, to see WAPJ presented here being a part of the community, , and it was great to see so many photos of Isadore Temkin and the Temkin family. What a rich legacy they have left in creating and supporting WAPJ as a resource for our community. So thank you and thank you for the slide presentation, Jacque Williams. And now it’s my honor to introduce to you a wonderful singer. Her recent single “Foolin Around” which she recorded with Nathan Hintz will be released at the beginning of the year and she’s working on an album of songs in New York. She’s played at Infinity Music Hall and Coe Park and now she is here to perform for us. . Please welcome Emily Victoria!” 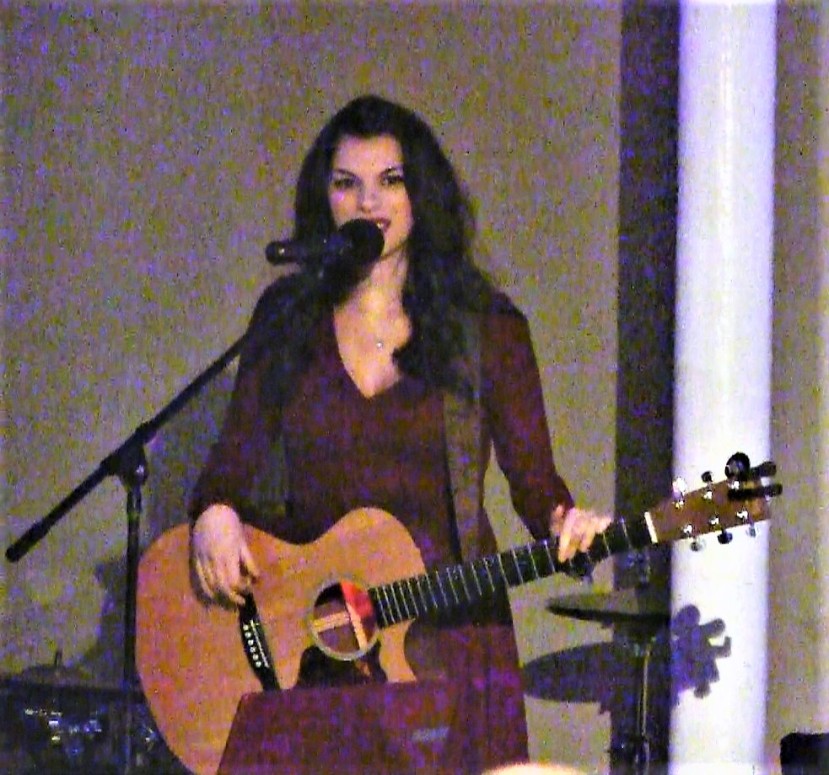 Emily Victoria rocked the house with a soaring set of original music including Take a Chance, Some Kind of Magic, Cruel Intentions, Let me Be and then she energized the crowd with a surprise rendition of the holiday classic “Santa Baby”.  She concluded her final number to heartfelt enthusiastic applause. 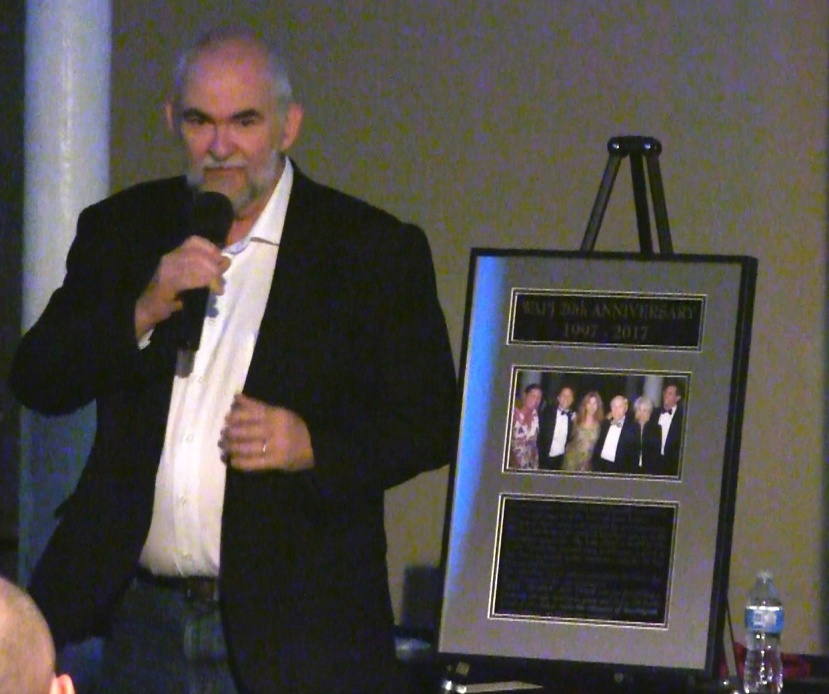 Jacque Williams thanked her for the performance and then invited WAPJ’s General Manager John Ramsey on stage to unveil and read the commemorative plaque which will be prominently displayed in the window at the WAPJ studio. The plaque featured a photo of the Temkin family and had a wonderful inscription thanking the family. 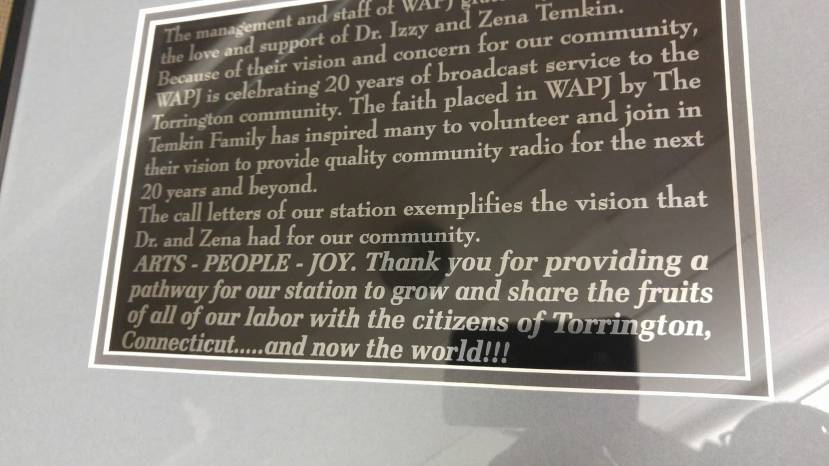 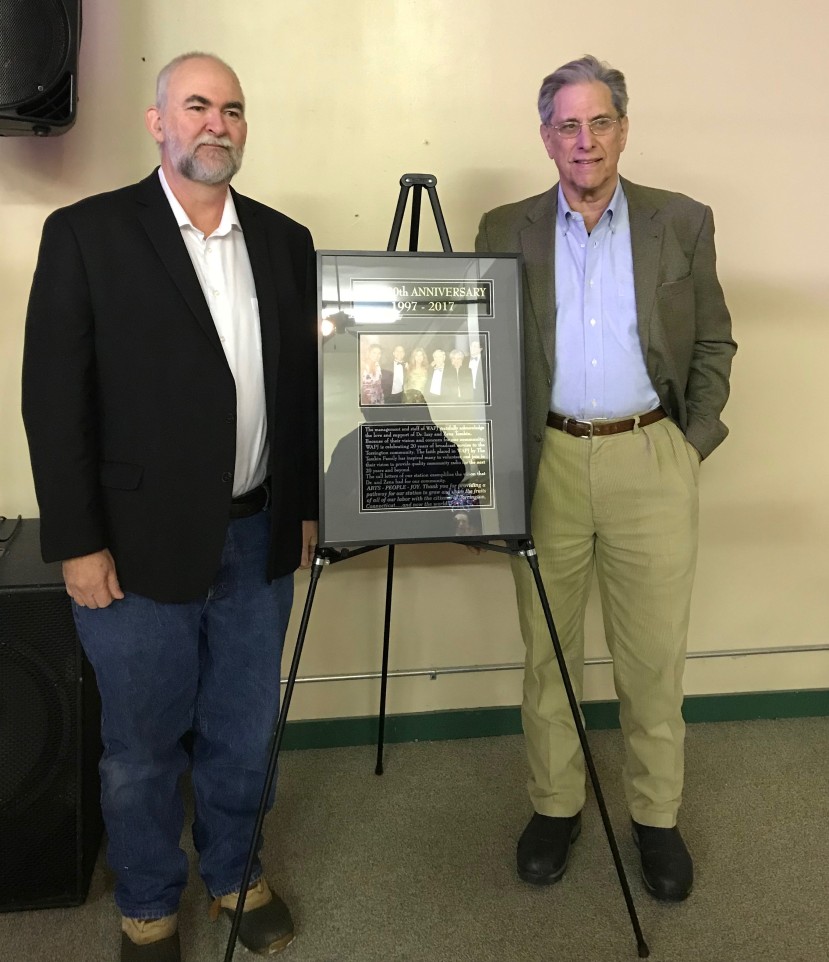 Jacque then introduced Brian Mattiello, a favorite local musician, who performed cover songs featuring some Simon and Garfunkel gems among other newer standards like Ben Harper’s “Steal My Kisses” He mentioned during his greetings to the audience that he only performs his original work in his basement but maybe someday he’d present them to an audience and after his set I’m interested in hearing what his original work when its finally shared. 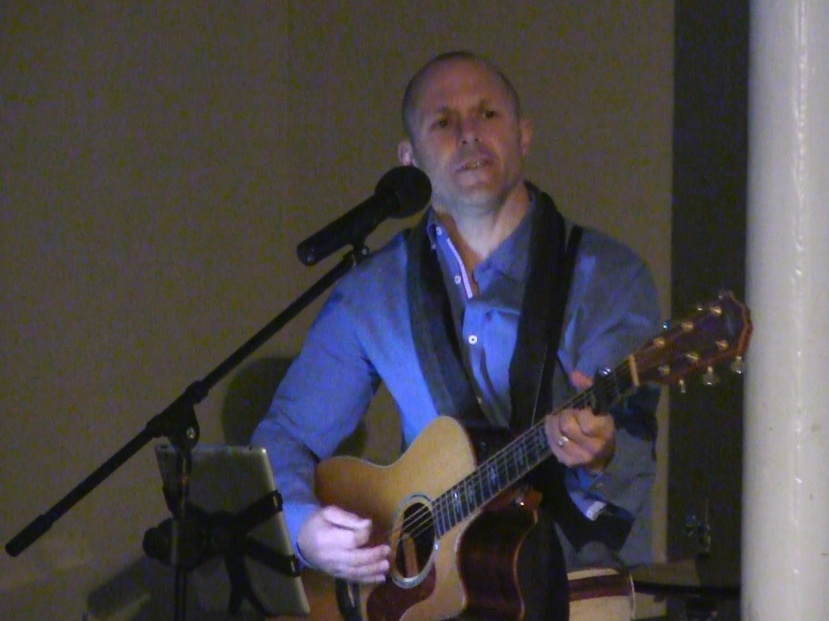 Jacque concluded the evening inviting those in attendance to enjoy the afterglow of the festivities. Suddenly a surprise visitor arrived with saxophone in hand. Jacque rushed to the door and then took to the stage to introduce a special guest Kris Jensen. As the snow fell softly to their impermanent yet perfect ornamentation outside the window we enjoyed a huge treat as Jensen performed a medley of Christmas favorites to play out the night.

Those in attendance, those who participated, who sang or spoke, those who were being honored and those who communed together on this night to bestow the honor, all could feel the special nature of the evening as it took place. Once again I marveled at our community marked by the abundance of cultural opportunities that are often far too plentiful for one person experience them all. I felt especially grateful to be a witness and active participant in this cultural experience with the perspective to see the through line in the cultural history of Torrington. Every story is built upon the foundation of the work and inspiration that came before it and there are far more stories to come from WAPJ as it continues through in its next twenty years, from Culture4aCause and the events they promote and create together with like minded creative organizations and from what can and will occur at this very special spot at the corner of Water and Main.

For more information about Culture4aCause visit their facebook page HERE

Information about Kris Jensen’s music can be found HERE

Special thanks to the Culture4aCause committee who put the evening together: