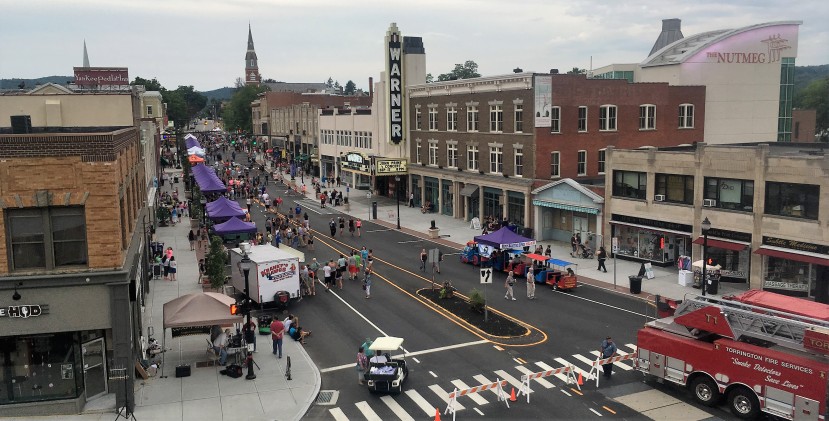 It was the beautiful “Torrington Thursday” kind of weather that only a beloved meteorologist like Scott Haney could procure when he took on the Grand Marshall honorary duties for the “Christmas in July” event of Main Street Marketplace.  There was heat for sure but not the sweltering oppressive heat of earlier days and a cool breeze would occasionally find a lane in the shade of purple tents that aligned the west side of Main Street.

Since the artistic Yarn Bomb enveloped the city’s landmarks and the new sidewalks aligned the art deco architectural treasures, the downtown already looked joyful but this year’s Main Street Marketplace was the perfect opportunity to showcase the town as a northwest Connecticut destination.  As I approached from the north, the hubbub of excitement seemed to stretch from St Francis all the way to the five points at Water Street. It was a good sized crowd without being crowded for the event was well-organized and there were no bottlenecks of pedestrians or vendors.  A small line formed at the DICE rolling station, a unique and free opportunity where anyone can sign up to try their luck one time for a chance to win a DISNEY vacation. I signed up online on Monday so I knew my space to roll would be preserved and continued my stroll southward. Residents and guests milled from tent to tent while a small train thrilled its young passengers as it traveled a route through the celebrations. 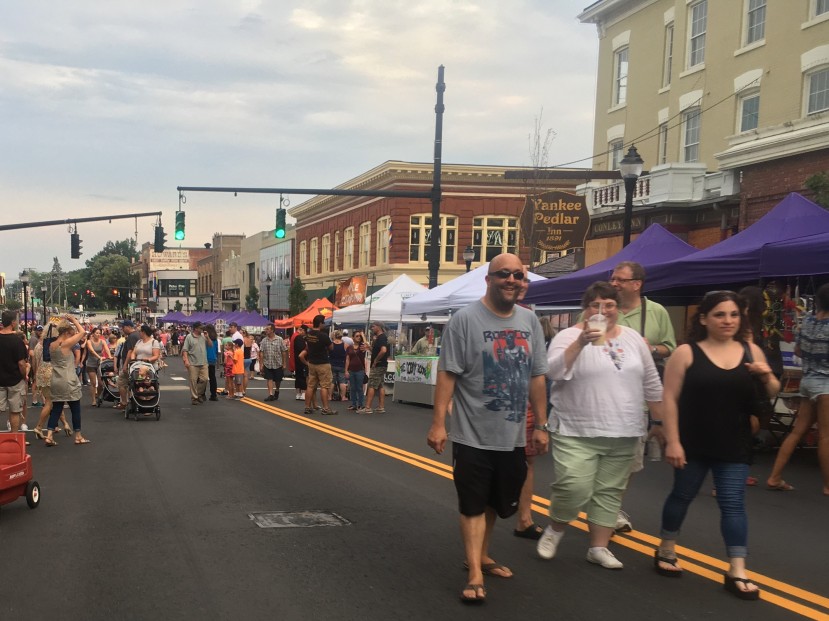 Local media was out in full force covering the marketplace. Doug Harrel of Optimum Cable News hustled up City Hall Ave carrying his video camera to obtain footage of the Curl Daddies who were performing a retro-rock instrumental version of a Christmas song in the Arena stage area. A “posse” of WAPJ radio DJ’s like Barrie Soucy, Max Tieman and more made their way toward the food vendors while John Ramsay manned the tent outside Performance Hub. I saw Bruno from the Republican American newspaper taking in the sights and I knew that someone from the Register Citizen was in all likelihood taking photos somewhere along the stretch.  In my freelance journalism journey my words have often traversed the keyboard to preserve arts and culture events but I wasn’t planning on writing anything this evening.  Normally my children are venturing with me and indeed last week they enjoyed both a train ride and treats from the Hardcore Cupcake truck but this evening I was there solo and with one specific purpose in mind; my goal was to take a grand photo of the market place.

There are so many wonderful, creative citizens who work hard to make our community the best it can be and many of them volunteer their time for the Main Street Marketplace event.  I stopped by the temporary office of the Main Street Marketplace committee to say my hellos to Sharon and Lou Waagner. Outside that office Jay Roberts of Performance Hub loaded a golf cart with the Official Guide newspaper created by Ed Cannata and headed north where Kris Roberts signed people up for the Disney Dice Roll. Ed was busy running back and forth down the street with one assignment or another and I knew somewhere Kim and Michael McAllister, who had been there earlier, was somewhere doing or preparing to do their part!

Together We Are Torrington 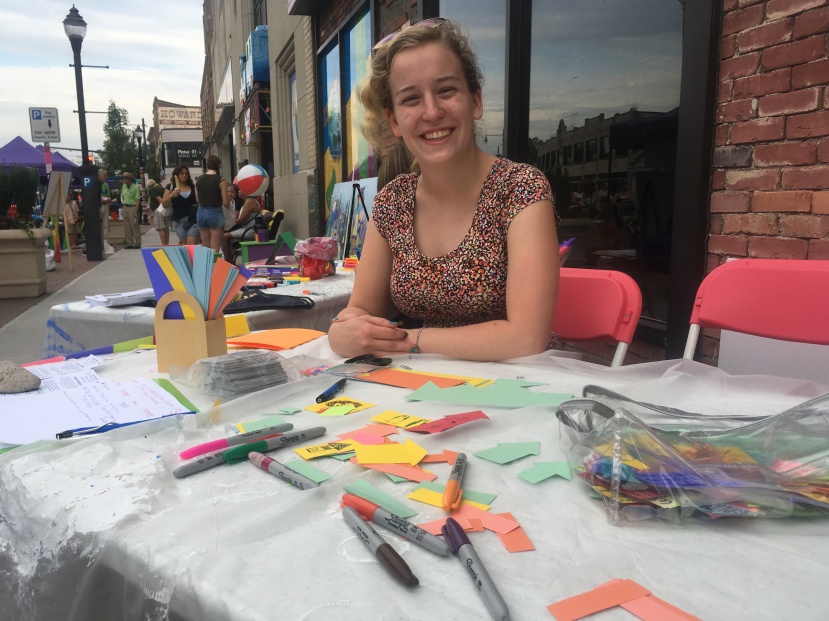 I crossed the street toward the KidsPlay children’s museum where JoAnn Ryan of the Chamber of Commerce stood outside looking festively attired. Just to the north was the mural created by the young artists of “Together We are Torrington”, a collaborative effort created by artist Karen Rossi and the Torrington PAL. Karen Rossi and Jill Yaun sat at a desk giving the opportunity for young children to create some art of their own.

Jack Sheedy is in the hat -center of the photo!

I bumped into celebrated author and award winning former editor of the Catholic Transcript Jack Sheedy and caught up with him. If you haven’t read “Sting of the Heat Bug” I heartily recommend it-I wrote a write up about it on Nutmeg Chatter. His work has a personal, conversational quality to it and I gravitated toward the writing style immediately.

Evan Dobos of Picture This, a Torrington company, happened by and we discussed the exciting program he’s working on, something I expect will make an enormous impact in years to come. While Evan and I were talking I caught sight of photographer Sheila Ivain who stopped by the Warner box office to purchase tickets to Seussical the Musical.  Sheila’s work capturing the moments of the Marketplace has been so extraordinary that many members of the Main Street Marketplace Team came up to her throughout the night and thanked her for her work as an official “unofficial” photographer of the festivities.  I invited Sheila on the journey to take a photo and she gladly accepted the challenge.

During the evening I took my shot at the DICE roll. I’m sure my children would wish that I could report that I rolled all six perfectly to win the prize but of course they didn’t roll that way. The opportunity still exists for someone to win the vacation but though my roll was unsuccessful, throughout the evening I felt like I already won something else of value. 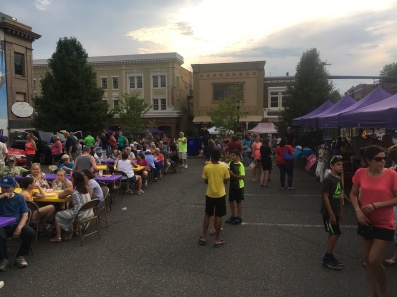 Main Street Marketplace isn’t just a place where children can play and enjoy the excitement of a festival atmosphere, but it does have those opportunities with the train rides and activities at KidsPlay and more.

Main Street Marketplace isn’t just a place where patrons of the arts can discover exceptional art but there is that opportunity from the studios in, around and surrounding Main Street especially the Five Points Gallery and  Karen Rossi Studio.

Main Street Marketplace is about community. As much as social media creates pathways for expression and instant connection with those many miles away from us, the opportunities to connect with our friends and neighbors individually, in person, face to face are some of the moments we cherish most, the moments we remember when sudden sometimes fleeting memories float through our consciousness like the sudden, joyful wind effortlessly floating through purple tents on a Main Street on a July evening.  What a happy experience it is to see Torrington come together, celebrating, and creating, as the city takes solid steps forward towards all it is destined to become and not just because random chance wills a destiny as a foregone conclusion but because there are those dedicated few who put in the time, make the effort and strive every day to build something wonderful for all of us to enjoy. There are three more Marketplaces this year, August 4th, 11th and 18th, each of those nights run from 5-9pm. If you take the opportunity to go, may you find your own happy journey and if you think of it, feel free to share it in your own way!